Ask and you shall receive. Ready for new Kendrick Lamar? okay here goes. These past few days TopDawg ENT’s CEO Anthony Tiffith teased that an album from his camp would be released at any given moment. Tiffith even drew attention by showing a vision board that listed ScHoolBoy Q, Ab-Soul, Isaiah Rashad, SZA and Kendrick Lamar. Next to K. Dot’s name was a flurry of question marks with a note to get on the phone and discuss.

Turns out, instead of a Groovy Q project, we’ll be hearing from King Kendrick again. Which makes sense after people rallied for the “Untitled” songs to he had been performing at live appearances to be released. Even Lebron James chimed in to lobby for a compilation of some sort. According to info on Spotify, it will be called “untitled unmastered“.

However, if the album will be available on Spotify, what was the point of hanging out with Jay Z at the Super Bowl and Warriors game? This body of work will contain eight tracks that vary in time between from 2013-2016. Check the tentative track list below and cover art. 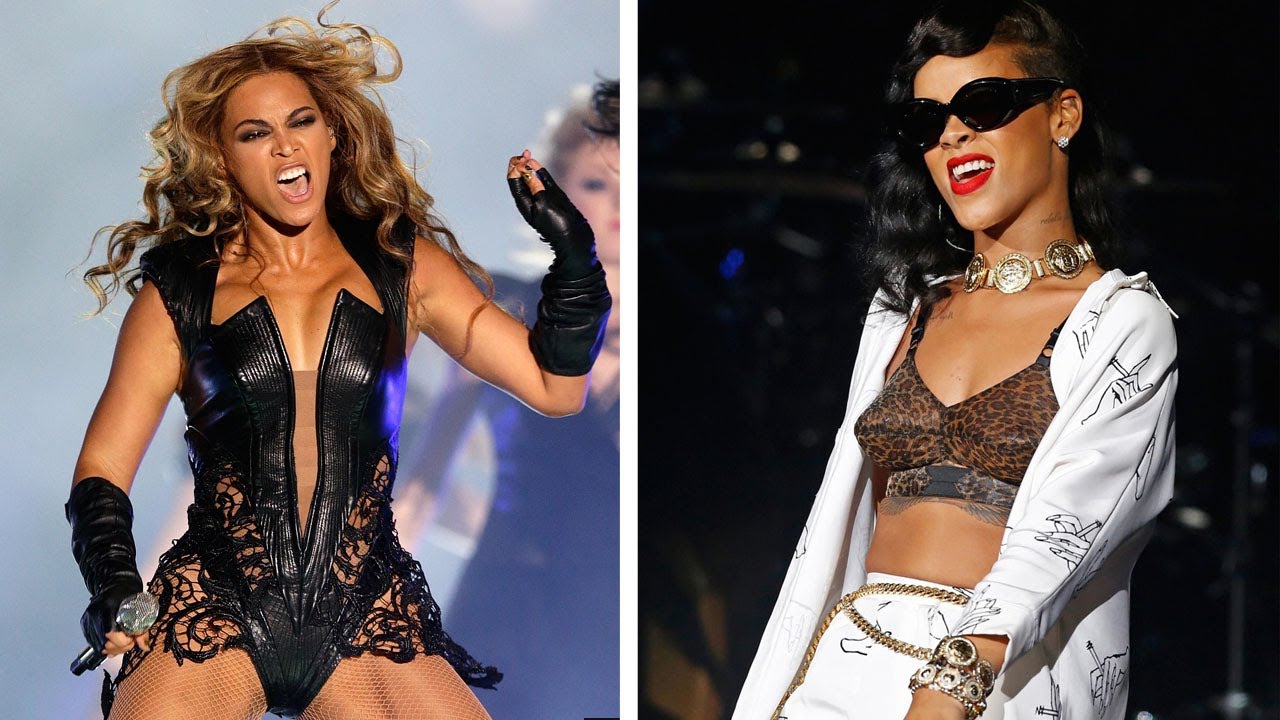 There’s about to be a girl fight! Rihanna may have just started a Tidal turf war with Beyonce over where their songs are placed on the streaming service’s charts. Eek!

Rihanna, 28, might find herself in hot water with Jay Z, 46, once the news of her latest Twitter interaction spreads. Many fans believe that the “Work” singer was throwing major shade at Beyonce, 34, all because of a tweet she liked.

Uh oh, what’s going on here? Rihanna and Beyonce’s fans are in a total uproar over a recent favorited tweet, and now many are accusing RiRi of trying to shade the Queen B herself. This does not sound good!

“The fact that ‘Desperado‘ is HIGHER on the Bubbling Under chart than a single performed to a global audience,” reads the tweet, originally posted by @DruChaos and later deleted after Rihanna favorited it and drew even more attention to his words. The tweet also includes a picture of Jay Z with his hands clasped in front of his face as if in shock over what’s being said.

For those of you who don’t already know, ‘Desperado‘ is a song featured on Rihanna’s ANTI album, and fans are assuming the “global audience” song is, of course, Beyonce’s “Formation.” Just one day after Beyonce released the music video for “Formation,” she performed it during the 2016 Super Bowl Halftime. However, “Formation” is not available anywhere other than Tidal and can not even be purchased for download on iTunes like ANTI can.

Jay Z, left, and Beyonce watch during the second half of an NBA basketball game between the Los Angeles Clippers and the Brooklyn Nets, Monday, Feb. 29, 2016, in Los Angeles.

With almost everything Beyoncé and Jay Z do, they continue to give us relationship goals. On Monday, the pair shared a slew of romantic moments when they watched the LA Clippers take on the Brooklyn Nets at the Staples Center. Not only did they look super coordinated in their blue-jean ensembles, but the couple couldn’t quit smiling at each other throughout the game. Even with her sunglasses on, you can still tell that Beyoncé had that look of love. Over the past few months, the two have been filled with flawless appearances, from their date night in LA to their other basketball game outing. Keep scrolling to see the rest of their night, and then check out all the times they looked crazy in love.

Katt Williams has challenged Kevin Hart. Hart has responded to Williams but it doesnt seem like he is too worried. If you ask me, Williams is trying hard to get a reaction out of Kevin Hart.

Hart posted a picture via Instagram with a crown on his head. The caption reads,

Kevin Hart is truly not thinking about Kat Williams. Would be a funny battle though.

Khaled’s deal means he’s being managed by Jay Z and joining the likes of Rihanna, Meek Mill, Big Sean and DJ Mustard who are all managed by Hov’s company.

“Allow me to reintroduce myself!!!! Meet my manager. His name is Jay Z. Jigga. Hov!!! Special cloth alert!” Khaled captioned a video of the announcement.

Rick Ross has reportedly been indicted on several charges, including kidnapping, aggravated battery, aggravated assault, and possession of a firearm while committing a crime. The indictment stems from a June 2015 incident in which he allegedly ushered Jonathan Zamudio, one of his groundskeepers, into a guesthouse at gunpoint and pistol-whipped him twice with a 9mm Glock.

According to TMZ, Ross’ attorney Steve Sadow is arguing that Zamudio was using the guesthouse to throw parties and use cocaine and other drugs, and that Ross was “acting in self-defense and in defense of his property when he encountered trespassers.” In other words, Sadow isn’t denying the Ross pistol-whipped Zamudio, but rather arguing that Ross was within his rights to pistol-whip Zamudio.

No date has been set for the trial. We will keep you posted as the story develops.

Moments after delivering an incredible performance at the Super Bowl 50 Halftime Show with Coldplay and Bruno Mars, Beyoncé made a hugh announcement. Following the moment on stage at Levi’s Stadium in Santa Clara, California, a commercial appeared, where Queen Bey announced her forthcoming “Formation World Tour.”

The 37-date stadium tour kicks off April 27 in Miami, FL at Marlins Park. The North American trek will make stops in Atlanta, Houston, Los Angeles, Seattle, Toronto, Chicago, and New York City, wrapping up on Jun. 12 at Hersey Park Stadium in Hersey, PA. From there, Queen Bey will hit Europe for 15 dates starting on June 28 in the United Kingdon. Dublin, Zurich, Milan, Paris, and Stockholm will also host the tour, before its finale on July 31 in Brussels. Named after her new single, pre-sale begins Feb. 9 with a general public starting on Feb. 16.

Check out the full dates below.

The long-awaited Super Bowl 50 Halftime Show delivered on Sunday night (Feb. 7). All eyes were on the field at Levi’s Stadium in Santa Clara, California, as Coldplay took to the stage performing international hits such as “Viva La Vida,” “Paradise” and “Adventure Of A Lifetime.” Decked out in a black leather jumpsuit, Bruno Mars and special guest Mark Ronson joined the British group to perform his No. 1 smash-hit song “Uptown Funk.”

Backed by a team of dancers, it was Beyoncé’s turn next, slowly moving across the field in an eye-catching black and gold outfit as she belted her new single “Formation.” After a playful choreographed back-and-forth dance segment between Queen Bey and Bruno to “Uptown Funk,” the two would join Coldplay for a beautiful finale of “Clocks,” Prince’s “Purple Rain,” U2’s “Beautiful Day,” and “Up & Up.”

Today not the most flattering pics of Rob Kardashian hit the net, and naturally a number of trolls and social media users had negative things to say about his weight gain. For years the reality star has battled depression and most recently he was diagnosed with Diabetes, but is currently on the right path to getting his life back on track with Blac Chyna by his side. When Chyna saw all the fat shamers and people talking greasy about Kardashian online, she was not with the sh*t and had an earful to say to haters. See photos of Rob that had people trolling HERE

Not only supplying some Complex cover eye candy — as well as a pretty candid interview — Tinashe rounds out an Internet-dominating Tuesday by debuting a new single from her upcoming album, Joyride. After teaming with Mike WiLL Made It on her last release, the SoCal songstress links up with another of hip-hop’s hottest producers, Metro Boomin, and continues down the seductive trap&B path on “Ride of Your Life.”

Warning: this is as steamy as those photos you’ve been staring at all day.